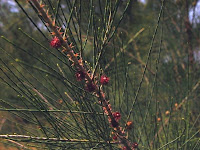 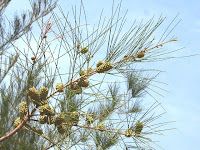 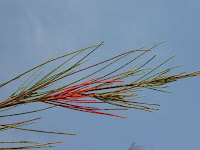 
A small family of two genera and 65 species confined to the southern hemisphere from South East Asia to northeast Australia. In India the family is represented by single genus and single species which occurs on east side of Bay of Bengal from Chittagong southwards and also cultivated in several parts of India.

Horse-tail tree (Casuarina equisetifolia) is the familiar example of the family.

They are much branched evergreen trees or shrubs of xerophytic habit with long or short, green , cylindrical and striate, whorled and jointed branches. The internodes of branches are furrowed. The leaves are in whorls of four to sixteen depending upon the species. They are small scale like linear lanceolate and are always basally connate forming a sheath surrounding the node.

The flowers are unisexual and the trees are monoecious or dioecious.

The male flowers are born in catkin like spikes which are terminal at the end of the green branchlets. At each of node of the Inflorescence axis there are several flowers protected by a sheath formed of the combined bracts. The stamens hang out over the edge of the sheath.

The female flowers are crowded in dense spherical or ovoid heads at the ends of the short lateral branches. The perianth is absent and the flowers are naked. The gynoecium is bicarpellary and syncarpous with a superior ovary.

The fruit is a samaroid indehiscent nut enclosed by persistent woody bracteoles which separate on maturity. The fruits are aggregated into a dry woody cone- like multiple fruit. The seeds are nonendospermic with straight embryo and flat cotyledons.

Pollination is by wind. Seed dispersal of Casuarina equisetifolia is by sea.

Posted by SATISFIED at 22:23 No comments:

In India this family consists of 20 genera and 105 species mostly in temperate regions.

Mostly annual or perennial herbs and rarely under shrubs . Stellaria aquatica is an aquatic herb.

The root is usually a tap root and the stem is often swollen at nodes.

The leaves are opposite or rarely alternate, simple, mostly linear to lanceolate and sessile. The two leaves at the stem are often connected basally around the stem. The stipules are usually absent.

The flowers are hermaphrodite or rarely unisexual, actinomorphic, pentamerous and hypogynous or rarely slightly perigynous as in arenaria.

The corolla has as many petals as the sepals. The petals are free and are usually differentiated into a limb and a claw. The stamens are usually twice the number of petals in two equal and alternate whorls. They show obdiplostemonous condition. The filaments are distinct or slightly connate at the base.

The gynoecium is of two or three to five fused carpels.the ovary is superior or slightly inferior and unilocular with free central placentation.

A disc is present at the base of the stamens which is annular or divided into glands.

The fruit is membranous or crustaceous capsule opening by valves or apical teeth.

The seeds are endospermic with more or less curved embryo.

Pollination is by insects.

The seeds are dispersed by water, wind or by adhesion or by birds, animals and human agency.

The family is valuable for its large colourful ornamental flowers which are easily grown.

Posted by SATISFIED at 21:43 No comments: 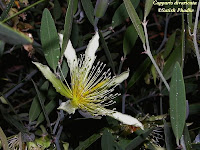 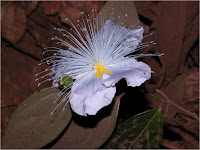 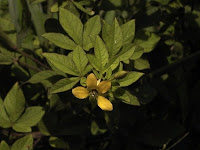 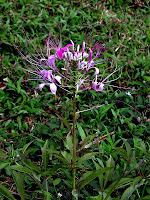 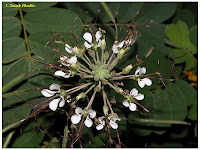 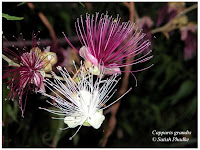 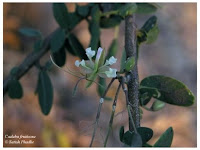 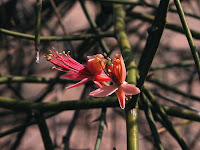 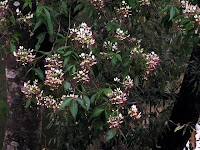 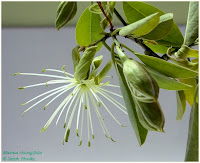 CAPPARIDACEAE OR CAPER FAMILY
In India 7 genera and 53 species occuring in western and south India and few in tropical Himalayas.
Vegetative characters:
The family includes herbs shrubs and climbers.They contain watery sap.
The leaves are alternate and simple(Capparis) or more commonly palmately compound(3-9 foliolate).The stipules are usually present which may be foliaceous(Cleome) or spinose(Capparis).
Inflorescence and flowers : The flowers are solitary and in fascicles of 3 or4 but more commonly the are racemose.
The flowers are bracteate,complete, usually bisexual actinomorphic or some what zygomorphic by unequal development of members as in Capparis, tetramerous and hypogynous.
The calyx is usually of four sepals which are free or basally connate with valvate or imbricate aestivation.The four sepals are arranged in two series. The posterior sepal forms a hood like structure in Capparis.
The corolla is of four free petals but occasionally the are two(Cadaba) or altogether absent(Roydsia).The petals are diagonal,often clawed and valvate or imbricate.They are inserted on the edge of a disc in Maerua.
The androecium is of four to numerous free stamens.An androphore is present in some species of Cleome.
The gynoecium is usually bicarpellary and syncarpous; the ovary is sessile or elevated on a short or long gynophore, unilocular with two or four parietal placentae. The style is usually short with a bilobed or a capitate stigma.
The fruit is a capsule dehiscing by two valves(Cleome) or a berry(Capparis) or drupaceous. The seeds are angled or reniform, nonendospermic and with an incurved embryo.
Pollination and dispersal : The pollination is by insects which visit flowers for nectar secreted by the disc.The fruits are dispersed by water current(Crataeva) or by cattle by adhesion due to viscid exudation.
Examples :
Capparis
Cleome gynandra
Crataeva nurvala
C. religiosa
Maerua oblongifolia
Cadaba fruiticosa

Posted by SATISFIED at 21:15 No comments: