FAMILY OF THE WEEK: VITACEAE 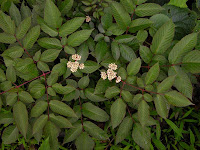 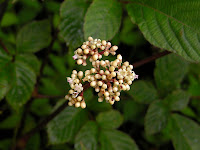 FAMILY OF THE WEEK: VITACEAE

It is a small family with 12 genera and 700 species worldwide, distributed in tropics and warm temperate regions of the world. In India there are 8 genera and 95 species occurring in western peninsular India and in the Himalayas.

They are mostly woody vines climbing by means of tendrils or adventitious roots. The tendrils are attached to the substratum by coiling or by adhesive discs. Species of Leea are small trees, shrubs or herbs. The stem is usually sympodial. The stem is angle compressed or cylindrical with numerous very large vessels, swollen or jointed nodes and watery juices. The leaves are alternate or the lower leaves are sometimes opposite, simple or palmately or rarely pinnately compound as in Leea. They are often pellucid punctuate and with deciduous stipules.

The numerous flowers are usually arranged in leaf opposed spikes, racemes, panicles or cymes. Occasionally the peduncles are flattened and expanded (Pterisanthes). Some peduncles are often transformed into tendrils or viscid discs which adhere to the substratum. The flowers are bracteates, hermaphrodite, rarely unisexual, actinomorphic, tetra or pentamerous and hypogynous. The calyx is small, four or five toothed or lobed or reduced to an inconspicuous ring. The corolla has four or five petals which are free or united. The petals generally fall when the flowers open. The androecium is of four or five stamens which are opposite the petals and are inserted at the base of the disc or between the lobes. The filaments are short, subulate and free or connate at the base (Leea). The anthers are free or connate, dithecous, introrse and open by the longitudinal slits. An annular or variously expanded nectariferous disc is present which is free or connate with the petals, stamens or ovary. The gynoecium is two to six carpellary and syncarpous with a superior and two to six locular ovary. The style is short slender and conical or absent and the stigma is capitates, discoid or sublobed.

The fruit is one to six chambered juicy berry with one or two seeds in each chamber. Seeds have a cartilaginous endosperm and a short basal embryo.

The Vitaceae are insect pollinated.